Watch Sarazanmai (Dub) full episodes online in English kissanimerus.
Synopsis: After the noble Kappa Kingdom falls to the Otter Empire, the Kappa prince Keppi loses much of his power and becomes helpless against the unseen Kapa-zombies. These zombies plague the world, and are the creations of the Otters and manifestations of people’s deepest desires. With no other choice, Keppi must rely on three young boys: Kazuki Yasaka, who must carry a box with him wherever he goes; Enta Jinnai, Kazuki’s childhood friend; and Tooi Kuji, a delinquent and a school truant.
By having the mythical organ called a shirikodama removed from them, the boys are able to become Kappa themselves and fight the Kapa-zombies. However, to defeat them, the boys must connect with each other via their minds, bodies, and—most importantly—secrets. As the Kappa Kingdom relies on these boys, they must reveal themselves as they have never done before, all the while learning that connections are fragile and truly precious things. 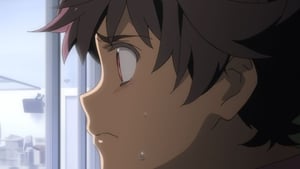 The World is Still Beautiful (Sub)